Chapter 9- The Melody in the Memories 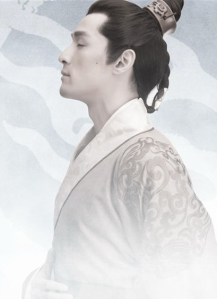 The lonely moon sighed in the dark sky as Xu Long Hui took out his silver jade flute. The delicate instrument flashed as faint and brilliant as the twinkling stars. After a moments, he held it to his lips and blew the first few notes, letting the melancholy sound melt into brittle air. The honeyed notes warmed the night around him and dusty memories of long ago stirred gently, gracefully rising out of the ground like ephemeral dancers in the wind.

Two ghostlike children, memories from a decade ago, ran past him, laughing and screaming, brought to life by the bittersweet music. Xu Long Hui could see it all, the garden, the little smiling girl in lilac, the lake of serenity…

The silver blue hue of the Zi Xin Sword flashed and spun in arcs and jabs as a 10 year old boy with shiny black hair weaved silently through the hanging orchard garden. Pale gold robes whisked through the blue and purple blooms of primrose and azaleas. Fluttering tiny leaves followed the current created by his sword and body like tiny fireflies chasing after a bright light. The young boy’s face was impassive but every curve and jab was made with deadly precision.

In the rough and dangerous time of the Waring states, the crown prince was raised from the cradle with a sword in his hands, not only used to defend, but to conquer.

As the eldest son and the future king of Dian, Zhuan Han Qin had already fought in two wars by the side of his father. He had seen good men die and bad ones live. He understood military tactics and the necessity of ruthlessness on the field. His coldness and strength of mind was already impressive, ministers knew that as the future king he would help Dian to greatness.

Suddenly he stopped, his serious face turned towards the east side of the royal gardens. The soft sound of crying had seeped into the air, disrupting the gentle calm with its distressed cadence. The boy quietly walked down the hanging gardens to the majestic linden trees that guarded the Lake of Serenity. There underneath the green protection of its rough leaves and golden bell flowers, he found a tiny pink and purple ball sitting between the trunk of a hundred year old tree. A little girl in maids clothing, no older than 9, was crying in great big gasps.

“Why are you crying?” He asked. The girl gasped and scrambled to get up, tripping and falling over in her haste. She looked up at him. Tears streaked a heart shaped face. Smudges of dirt and grass edged her forehead and nose. She looked like a little doe, her lips quivering in alarm and fright. The young prince had the strange feeling in his chest, he wanted to smile at the silly looking girl.

“Who are you?” The girl’s words tumbled out as she stood up, “Why are you spying at me?” The young prince blinked, “I was practicing with my sword and I heard you crying.”

“Oh..I wasn’t crying or anything… I… I was singing.” The little girl frowned as she tried to wipe her nose, causing a dark streak of dirt to appear on her lip. She looked at him angrily, a fierce look that no one in the palace would dare use with him. The corner of his mouth twitched as he tried to look serious.

“Why were you singing then?” For some reason, he was humoring this little girl who watched him with big, anxious eyes. Maids were supposed to wear their hair in the shape of an elegant dove, but hers looked more like a manic chicken, with stray strands bobbing up and down frantically. Her pale rose pink skirt and lilac robe looked as if she spent the entire afternoon rolling in the mud.

Suddenly she looked him up and down, her face draining of all color as she realized who she had been talking to.

She gave a little yelp and dove to the ground, “My..Y-your Greatness, I mean My Highness, I mean, Your Ladyship Concubine… Cro.. Crown Prince!” She stuttered, her face an inch from the ground.

Zhuan Han Qin could not help himself and grinned  as he helped the completely bewildered little girl up.

“I’m Xue Lan Hua, my Papa told me that means Orchid That Blooms In The Snow. My friends called me Hua Er. You can too!”  Hua Er chirped at him after she scrubbed the dirt away from her face. They sat side by side in the shade of the weeping willow, on the tiny red and black deck built on the Serenity Lake.

“What are you called?”

He looked at her, his black brows knit into his usual frown, as he thought about how to answer her, “I’m called Your Royal Highness”

Hua Er laughed. it reminded him of the sound of twinkling chimes as she gave him a playful shove. “No, silly, what do your parents call you?”

The frown became deeper. “I don’t see my mother or father a lot. Mother is busy ruling the country while Father is at war. My full name is Zhuan Han Qin, Han meaning endurance, Qin meaning conquerer.”

She nods and says his name, rolling it in her mouth until she smiles, “I got it! You can call me Hua Er and I’ll call you Qin Er! Papa told me that if you call someone like that, you can be good friends with them. You’re the only person in this whole palace that’s been nice to me. Let’s be friends!”

Han Qin was not a person who could be surprised easily, but his eyes widened with shock at the familiarity this impudent girl used his name. He demanded, “Why have you talked to me for so long? Everyone bows and scrapes when I pass.”

Hua Er pondered this and her heart-shaped face lit up, “I’ve only been in the palace for two months. All they told me was that I had to bow to you if I see you. They didn’t say that I couldn’t speak to you.” Han Qin ‘s lips twitched at the innocence and naivety of the little girl in front of him.

A thought came to him, he asked “Why were you crying?”

A moment of sadness extinguished the light from her eyes, “Auntie Yen said that if I was good and entered the palace under her care, she would send the money they give me to help my sick papa and my brothers and sisters. I got some money today but some of the older maids told me I had to give it to them. They were bigger and they kept hitting me.” Big fat tears dripped out of her warm brown eyes and onto her pink and lilac lap as she showed him a bruised arm. “I want papa to get well soon and I was suppose to meet Auntie Yen today to give the money to her.”

Han Qin reflected on it for a moment. He looked at the crying imp in front of him and before he knew what he was doing, he reached onto the top of his Huang Zi Crown. On the small black jewel encrusted crown covering his top knot he plucked off a teardrop shaped piece of amber the size of his palm. He placed the jewel into the speechless little girl’s dirt streaked hands.

“This is a piece of amber found deep in the heart of the Stone Forest. It was cut by the renowned master Zhao Qiao An. It should be enough save your father. Go and find your Auntie Yen.”

She smiled into his eyes, and Han Qin was stunned. The warmth and light of her smile sliced through his cold exterior easier than his prized blade through a piece of stone. She grabbed his hand and jumped up excitedly, “I have to find Auntie Yen! I’ll see you again Qin Er” And with that she smiled a smile that a lonely little boy had craved to see but could never find in the cold palace. He watch as she galloped off, the ghost of a smile hovering on his lips.

Han Qin looked at the hand she had held. The snow white clean fingers had traces of rich dark earth. Though she was no warrior, nor had she gripped him tightly and while it did not hurt… his hand felt.