April 8, 2018 By dramatictealeaves in A Fantasy Novel - Daughter of Heaven 7 Comments 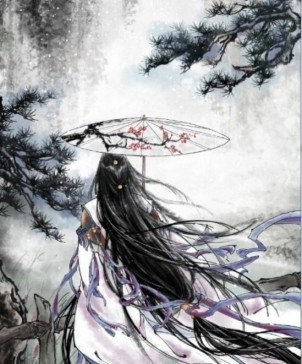 A woman stood on the edge of the cliff, her white robes dancing in the winds. She looked off into the distance at the vast city of Yue that sprawled out in front of her. At the center was a palace that outshone everything else with its gleaming golden roofs and red walls.

“Home.” A man walked up to stand beside her, Zhuo Hao surveyed the sights, the emotions hidden in his dark eyes. How long ago has it been since he last came back? When his mother died he made vow that he would never return, but now he was prepared to take back the kingdom.

Yu Zhu gazed down, it reminded her of a hazy memory of long ago, where a girl ran, dancing down a corridor, her father laughing as hapless servants chased after her.

A hand reached over and held hers. Lin Yu came over and stood beside her, “You look like you’ve seen a ghost.”

Yu Zhu shook her head, “No, I was just thinking of foolish things.” She turned to the alcove of trees, “Your men are here.”

“Master Zhuo Hao” A dark shadow flitted down from the sky, “Everything has been prepared for your arrival.” A masked man knelt in front of the three, and addressed Zhuo Hao with respectful obedience.

Zhuo Hao nodded, “And our troops?”

“They await your orders.” The masked man replied. Zhuo Hao waved a hand and the masked man melted back into the shadows.

“Once it’s dark, we’ll head into the city.” Zhuo Hao told the two women, “In two days Hua Er will be marrying my brother. Her coronation will take place then. We strike the day after.”

Yu Zhu turned around, “Very well.” And walked away.

Lin Yu wanted to go after her but Zhuo Hao grabbed her wrist. She turned around with a questioning look in her eyes. Zhuo Hao blushed and let go very quickly.

“I…uh…” Zhuo Hao said, his face red, he cleared his throat but choked on his spit and started coughing.

Lin Yu couldn’t help but grin, “It’s a good think your men’s left. We’ve got to protect that image of yours”

Zhuo Hao cleared his throat, “I wanted to ask you a question.” When he didn’t hear a reply, he continued, “Lin Yu, you know how I feel about you… and if our crazy plan works…I want to make you my Empress.” He took her hand, “I will give you the world and anything you ever want in this life.”

He took a step closer, “The moment you saved my life, I was yours. I thought this world had nothing left for me. I was a worthless and useless prince, but you gave me hope. In each of your smiles, laughs, curses, I found strength to go on. I never wanted a kingdom, I couldn’t care less who was emperor. But if you were my Empress, I would protect you and everything we build. You are the reason for why I fight for this crown. Give me your hand, and I will give you all that I am and will be until my last breathe.”  He leaned in, “Say yes. Please?”

Zhuo Hao continued quickly, “Take your time. Think it over? Don’t answer me now.” With that he rushed a way, the light in his eyes slightly diminishing. Lin Yu put her hands to her warm face and took a deep breath.

“How sweet.” A cool voice sneered, “But does he know the price of marrying a demon?”

Lin Yu turned around quickly, “Huang Wu.” He leaned against a tree, a derisive smirk on his face, “Have you told him what you are?”

His dark robes brought out the darkness of his magnetic eyes, he walked closer to her.

“He knows.” Lin Yu said with equal coolness, “I don’t think he cares.” She frowned, “Why are you listening in anyways? You’ve avoided me this entire trip like I had the plague.”

“So you’ll say yes?” Huang Wu ignored her other question, “Will you repeat the tragedy that was your aunt? Make the same mistakes that your mother made?” Huang Wu wanted to know, “Will you commit a sin for the sake of love?”

Lin Yu’s face went pale, “How dare you.” She drew out her sword, “You know nothing about me and my family.” Her blade was an inch from his neck, “You don’t know what I lost.”

Huang Wu took a step towards her, the sword making a thin cut on his throat, “Do you think you are the only one who has suffered? Do you think no one else has ever felt that burden? An immortal loving a mortal destroys the balance of nature. They get their tragic and lovely ending that becomes a poem or a song that people sing for thousands of centuries, but what about the rest of us? Why do we have to suffer because they were selfish? What’s so great about their love that they have the right to destroy everything?”

The hatred in his eyes seemed to swallow the earth whole. “I know exactly what you lost.”

His face was a mask of savagery as a thin stream of blood drew a line onto her sword as he took another step towards her, his large hand gripping hers now, “Your aunt’s love destroyed an entire city with a flood. Your mother was a revered high goddess whose powers were taken away by her betrayal of natural law. How many people did they hurt for love?”

His chest rose in anger, “I wish you understood the price of this love. If you really did, then you would have killed the mortal on the spot for asking you to marry him.”

Lin Yu’s sword clattered to the ground and she stepped forward, placing a hand on his cheek, “What happened to you?” Her face was inches from his, “Why won’t you tell me what’s going on?”

Since the death of his father and brothers, he had not felt the warmth of another’s touch. Since the destruction of his world, he had not seen a glimmer of hope. On his shoulders carried the heavy responsibility of revenge and it was exhausting.

He leaned into her hand, craving the warmth that had eluded him since everything had turned to dust. His hands automatically circled her waist, as if trying to hold that modicum of warmth.

Lin Yu leaned her forehead against his, “Why have you avoided me since you got back? Why don’t you tell me what’s wrong?”

His breath mingled with hers for a moment, her scent threatening his will, eating away at his hatred.

His eyes snapped open and he stepped away, “Don’t.” And walked away.

“Father… I caught a dragonfly!” The ghost of a girl sprinted across the front of the lily pond, her little hands cupping the creature carefully.

“You little rascal.” The man in a gold dragon robe laughed and patted the child on the head, “Let it go so we can watch it dance on the lilies.”

The little girl nodded and opened her hand, the little dragon fly flitted into the thick green lily pads.

“Father….” Yu Zhu said softly. In her long and lonely existence, she had forgotten that a man had loved her unconditionally and raised her with love in the cold and lonely palace. He taught her all she knew and made the cold palace into a warm home.

Since returning to the mortal world she had not allowed herself to think about the king who had raised her, the man who had spent his entire life protecting her. He had died without seeing her ever again.

The dragon flies would dance and the lilies would blossom, but the father she knew and loved would never be by her side again.

“Why are you crying?” A voice called to her.

A man, dressed in the armor of a warrior asked her. She looked up, her hand automatically went to her face. Yu Zhu looked at the tear on her fingertips in surprise. She had not shed a tear in almost fifty thousand years.

The man walked up to her. Yu Zhu looked him over. He dressed in plain clothes, but it could not hide his strong figure and commanding air.

The man studied her too. Her eyes were cold, and face impassive. Like those of a goddess statue in the temples of worship. He stopped an arms length from her.

Yu Zhu touched her own face. The tear had become icy in the cool night.

A white square of linen appeared before her vision, “Here.”

She turned from him, “Thank you, but I don’t need it.”

He sighed and stepped in front of her again, gently he wiped the tear track from her face, “It’s too cold for any part of you to be wet.” He placed the linen handkerchief in her hand, “If you don’t want anyone to see your tears, it’s better to not leave traces.”

She frowned, “You are impudent.”

The man grinned, “And good looking.”

There was something about his smile that made her feel like she wasn’t stone. It touched a part of her that had not felt alive in a long time. He was a head taller than her, “What were you thinking that made you look so sad?”

She thought for a moment and found herself saying, “I always thought that the difference between gods and mortals was that gods no longer could feel the pain of losing someone. Gods live for so long that all they had to do was to forget.” Yu Zhu looked at the lily pads in the pond, “I thought I had forgotten.”

“Time can heal wounds but the scar will remain.” The man said, “No one truly forgets or is forgotten, that is the curse of immortality. Some gods will go to great lengths to forget their past lives and deeds. They become colder than stone.” He looked into her eyes, “Those gods can destroy the world without a thought.”

Yu Zhu raised an eyebrow, “You sound like you know a lot about Gods and immortality.”

The man grinned, breaking the tension, “I’m an expert on many subjects.” A small smile broke out on her face.

“Remember even if it hurts.” He said softly, ” Remember everything, because it makes you, you.”

He bowed and walked away.

She turned and called after him, “Who are you?”