March 27, 2018 By dramatictealeaves in A Fantasy Novel - Daughter of Heaven 1 Comment 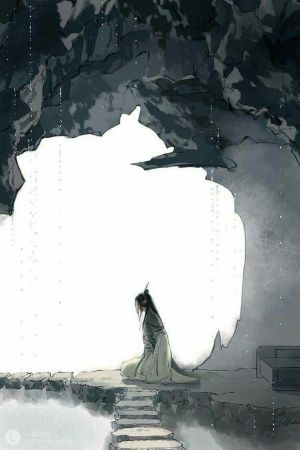 The Dungeons of Heaven

Deep in Pool of Origin, where the first of the world arrived was the Soulless Canyon, the grave to countless gods and monsters cast down to feed the Creature Below.

In the depths of the canyon, hung a man between two cliffs, his hands holding onto two chains that were nailed into the walls, miles apart. His robes fluttered in the infinite darkness, around his feet wrapped a thick chain that hung into the bottomless pit. Below, the Creature with pulsing blood red eyes waited for the half-origin god to weaken and fall.

Wei Yun looked as at peace as he did in the monster realms, even as the spikes from the chains cut into his flesh and dripped his blood down into the chasm. The Creature below roared as it tasted the prisoner’s blood.

In the infinite darkness, he was the only source of light, his godly light glowing like a bright flame in the nothingness. Suddenly, Wei Yun’s eyes opened, the storm grey of thunderstorms stared out into the expanse.

The air itself rippled like water, the energy of the magical disturbance seeming to split the fabric of space itself.

A woman appeared out of thin air. White petals guided her way in midair as she came to him, her bare feet briefly touching the glowing flowers as she walked in nothingness. Her robes of starlight glowed softly, making her looking like a distant star in the sky.

Her eyes seemed to burn with the eternal flame, set on a face of terrible and unimaginable beauty. Yet she didn’t look complete, as if she was a mere reflection in a pond rather than flesh and blood.

Wei Yun stared at the woman for a minute, “Nu Wa.”

Wei Yun’s voice was cool, “I thought you wanted nothing to do with…your less than obedient creations. You must need something from me.”

“I heard that the Emperor has punished you by throwing you here, to endure a thousand years of agony and torture.” Nu Wa said cooly, “Of course, most gods die here within a few years. Perhaps he’s waiting for you to weaken so he could take Pan Gu’s heart before your soul completely disintergrates.”

Wei Yun chuckled mirthlessly “Did you sneak all the way back into this world just to watch me die? Should I feel honored that the greatest goddess, mother of creation will waste her powers on me?”

Wei Yun looked at her, “There was a time where I bowed at your feet. But, can you blame me, after everything that has happened?”

Nu Wa’s eyes darken, after a moment she said, “I am not here to remember the past.”

“No. You never did care for many.”

Nu Wa sighed, “Surely you can let it go? There is much we have to discuss and very little time for us to do it.”

Wei Yun raised an eyebrow, “What could you and I possibly discuss? You live in a different realm now, hidden from the Emperor. Another world, even if it’s a broken one.”

“A half-life realm that will disappear when I die.” Nu Wa reminded him, “Once he finds and kills Yu Zhu, his attention will turn to me and my people.”

The sardonic look on Wei Yuan’s face died, “How do you know her name?”

The silence was terrible between the two powerful beings.

His eyes seemed to hold the gales of a hurricane, he roared “WHAT HAVE YOU DONE?” The chains rattled as it cut deeper into his flesh.

“More than you were willing to do.” Nu Wa said in her gentle but terrible voice, “I gave her the powers of an Origin god so she can fulfill her destiny.”

Wei Yun’s face was a mask of ice, “You persuaded her to do your bidding. You’re using her as you do everyone. As you did to the White Snake and her sister.”

Nu Wa’s face was unyielding, “We all need purpose in life. Her interests and mine aligned.”

She continued, looking below, “That Creature you see underneath you was one of the first Beings created in the universe, it only knows of destruction and hunger, it ate everything in its path, like a fire that burned away the emptiness and chaos so the living could grow.” She looked at Wei Yun, “If the First God had curtailed its appetite, then perhaps it would have turned on its creator.”

“And now it’s imprisoned and cursed into the depths of this world, waking up only to feed on the scraps of gods and demons.” Wei Yun said flatly, “You Creation gods only care about purpose when it serves you.”

Nu Wa waved a hand, an image of Yu Zhu in the nameless, borderless lands appeared, vanquishing a million evil spirits with a wave of her sword. “You may block the path of water, but it will only carve another way to its destination. She is destined to meet the Emperor. If she dies, then that is her fate.”

Wei Yun stared at that image, “He is still more powerful than her. He has an entire army. You’ve killed her.”

The image disappeared, “Perhaps you can still save her.”

Wei Yun laughed bitterly, “Me? My power has been suppressed by the Dragon Emperor. If he knew of a way he could extract Pan Gu’s heart from my body without me blowing up half the world, he would have done so.”

“And if I can offer you another alternative?” Nu Wa’s eyes were not kind, “What if I can help her live through this?”

“She will have you, as you possess Pan Gu’s heart, and if she finds the Artifacts, no one will be able to stop her. And she will have my godsblood.”

Nu Wa opened her hand, a golden lotus rested on the air above her palm, “The Blood of Creation, as pure as it can get.” It was beautiful and incomplete. Only three petals remained of the twelve. She inspected the beautiful object in her and, “I used three to create this world. Two to escape the emperor. Three to my daughter. One for my little world I live in now. All I have are these three left.”

“You know what happens if it runs out.” Wei Yun said, his voice low, “Pan Gu used all of his to create this world, except for the one drop that was used to create me and my brother. Once it was gone, he died.”

“Yes.” Nu Wa said, “Giving it away means it will only be a matter of time that my power runs out.” She looked at him with a simple smile, “This is the most powerful magic and it is the most powerful poison. You body will not be able withstand it,  and one day, it will kill you.”

She looked at Wei Yun, “I will use the first drop to create a copy of you. The creature will try to devour it. Three days in heaven is all I can offer.”

“Three days in heaven. Three years on earth.” Wei Yun muttered. He looked at the golden blossom in her hands, “I accept.”

Nu Wa’s eyes showed a hint of her surprise, “This isn’t the death that mortals experience. Your soul will shatter into a thousand pieces. You will cease to exist. That is the price.” Nu Wa cautioned.

“A small one.” Wei Yun said quietly, looking at the three drops of godsblood in the shape of golden lotus petals.

“Why?” Nu Wa wanted to know, “Why are you so ready to give up everything? In a thousand years perhaps the Emperor will forgive you and you can take your place in heavens again. Perhaps you will become a feared war lord of heaven once again, able to enjoy the delights of immortality.”

“In a thousand years she wouldn’t exist.” Wei Yun said quietly, “Immortality would be meaningless.”

Nu Wa was silent for a moment, “Very well, help Yu Zhu find the 4 artifacts. Protect her, until she can kill him.”

The first petal drifted upwards. It broke through an invisible barrier between the goddess and the real world, floating in front of Wei Yun. Slowly it began to take his shape and became a perfect copy. The copy turned and raised its hands, the chains unwrapped itself and slowly began to wrap around the copy.

Another drop of Nu Wa’s Godsblood floated across to him. Power of a Creation God, raw and unfiltered, filled his veins. It destroyed the spell that the Dragon Emperor had cast upon him.

The third drop in the shape of a lotus flower entered his heart and Wei Yun closed his eyes. He had never felt so powerful, not even in the prime of his fighting days. The wounds created by days of unspeakable torture healed itself, the God of War was back.

“Will you go to her as yourself?” Nu Wa wanted to know once he had absorbed all the magic.

Wei Yun shook his head, “I don’t want to reveal to the world that I am free. Least of all, to her.” He looked away, “She might have forgotten me anyways.”

Nu Wa sighed, “Remember, don’t use your power until you have to. The Emperor will sense a magical disturbance.” Nu Wa’s face had become deathly pale, a trickle of blood ran from her lips.

“How long can you last?” Wei Yun frowned, “How long will your world last now that there is no more Godsblood to sustain you?”

Nu Wa shook her head, “The last drop is the one I used to create my realm. My magic won’t die so easily, not when I created everything at my full power. I will be fine for now.” With that she vanished, as quietly as she had come into this world.

Wei Yun looked at the place she stood. With a slight bow, he too vanished from the place.