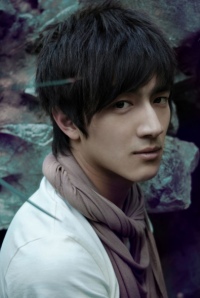 Can the two of them get any cuter? And how gullible is Lin Geng Xin? I think in the right circumstances, that boy will believe anything anyone tells him if enough people tell it to him. He’s like a handsome, adorable puppy. Why Lin Geng Xin decided to dress like a colorful canary, I have no idea.

So the 3 younger cast members of the movie Detective Dee came to Happy Camp. They are – Lin Gen Xin, Mark Chao (Chao Yu Ting), and Angelababy. I personally don’t hate Angelababy, I just find her name intolerable. But hey, if you asked me if I would watch Lin Gen Xin and Mark Chao bromance for a good chunk of the show, then absolutely. As for the abomination that Lin Geng Xin is wearing, words can not describe my reaction to his horrible wardrobe only that it should be put out of its misery and never see the light of day. The pants Lin Geng Xin Wears looks like something a clown discarded because unicorns barfed on it. But he smiles adorably so I won’t quibble.

Angelababy is asked, since she was the only girl on set, who was the meanest to her. She points to Lin Gen Xin, who looks surprised and says, “what? I’m good to you”. Angelababy pouts and says yes, he was nice to her, but he spent all his time with Mark Chao and they were so good to each other. When asked if he and Mark became good friends, Lin Geng Xin says, “it would seem so”. Mark looks at him and barks, “Just say yes, what do you mean it would seem so?”

They start the games section of the interview. In this game called “who is the spy?”, all the participants except the spy gets the same word. Only the spy gets a different word. No one knows if they are the spy, not even the spy. Everyone is asked to describe the word, and based on the description everyone votes on who the spy could be. After every round of guessing, one person is eliminated, until either the spy wins by never getting eliminated or the rest of the people win by eliminating the spy. 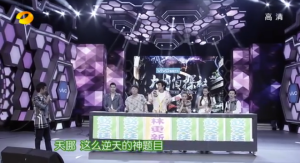 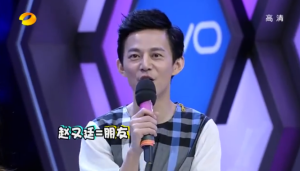 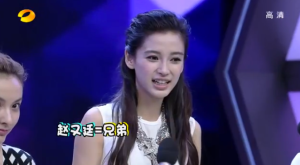 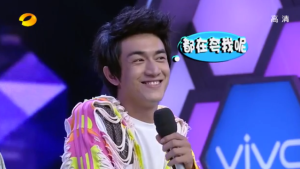 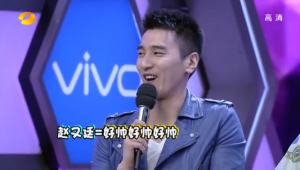 Hai Tao is voted out, and the hosts tell him that he must be blind if thinks he is more handsome then the described person, if not, then he must be the spy with the different word. Lin Gen Xin tells him that he was way too confident about his looks.

Hu Jiao: he doesn’t say anything, but rather draws a circle. (Mark Chao’s girl friend’s name is Yuan Yuan, which means round in Chinese.)

Lin Gen Xin and Angelababy both has two votes. Angelababy gets out because Mark has the deciding vote, and he chooses to eliminate Angelababy over Lin Geng Xin . Thus the description of “Grows Hair” loses to “Is of the male species”. 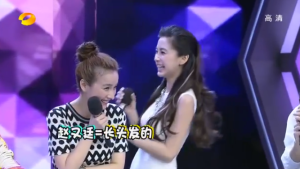 Round 3 Describing the word “Mark Chao”:

Lin Geng Xin: Has been on Happy Camp 4 times. (Can I just say that Lin Geng Xin has the best blank expression ever?!)

The votes go flying back and forth but Mark votes to eliminate Lin Geng Xin, Mark reasons that if it wasn’t Angelababy, who he sacrificed last round, then it must be Lin Geng Xin. They all vote for Lin Geng Xin, who gets out and loses the game. 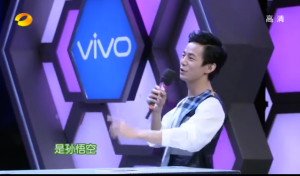 They ask him to think about it, think about it really hard and kept feeding him the clues they used. He Jiong wonders how did Lin Gen Xin, with his intellect, last so long in this game. Host Hai Tao quips that he was playing with a good/dumb group of people.

They give him another hint about who it is saying the line, “Are you here?” which is a famous Mark Chao reference. They tell him that the person is here (As in, they are participating on Happy Camp.) 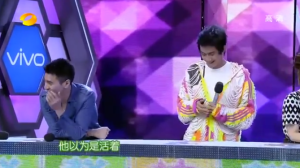 Lin Geng Xin is more confused he asks if by “The person is here.” Did they mean that the person is someone who is living right now? Mark can’t take it, and has his head in his hands. The hosts are dying at this point. (So Am I)

Finally host He Jiong draws two big circles, to which Lin Geng Xin says, those are circles. He thinks about it, finally gets it, holds his head in shame as Mark Chao laughs.

In the entertainment circle, Lin Geng Xin is pretty much known for his guile and his naiveté (you can tell the boy that the sky is red and if enough people say it to him, he will believe it). 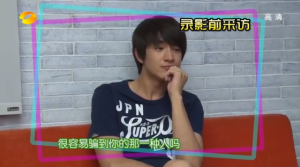 So the hosts, Angelababy and Mark Chao decides to prank him during the show. They are going to make Lin Geng Xin believe in Hypnosis.

Before the interview, Angelababy and Mark are meeting with the hosts, and they say to the camera:

Angelababy: Lin Geng Xin, you are so screwed.

Mark Chao “No matter what happens, I will still love you. Please remember that.”

During the discussions one of the hosts says: “We’ll be fine acting out our individual parts, but we have to make sure that it doesn’t look like we are acting.”

Mark Chao quips “He (Lin Geng Xin) won’t even think about that, he won’t suspect anything thing.” We Xin, the girl host, agrees, “Yeah he won’t, he’s not that bright. 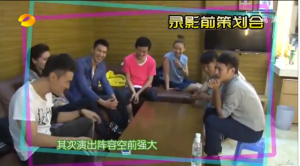 Here are their steps of pranking Lin Geng Xin:

Through a fake demonstration with a fake hypnotian with a pre picked team, Lin Geng Xin admits that he also believe in Hypnosis. Lin Geng Xin watches everything with intense fascination. 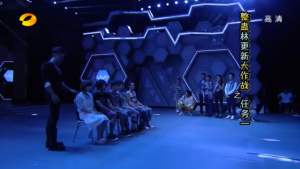 Step 2: Make Lin Geng Xin think he can be Hypnotized

They bring out a heavy box that no one can lift, but after being hypnotized, Angelababy can lift it. (the box is actually a trick box used in magic tricks, the weight can be adjusted.) They “Hypnotize” Lin Gen Xin and he lifts the box. Omg he believes it, when it opens his eyes, the expression is so funny it’s priceless.

Lin Geng Xin is “hypnotized” to believe that he is a iron pole. They carry him onto two blocks, he really is very very ridged like an iron pole. 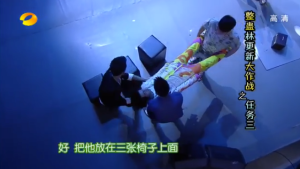 The lift him onto two blocks, and his body goes ridged. 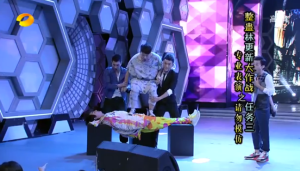 They bring him out of “hypnosis”, When asked if Hai Tao was heavy, he says no, but:

He Joing : You really thought you were an iron poll

Hai Tao: I was scared too, If you couldn’t stand it then I would get hurt when you fell.

Lin Geng Xin retorts: I would have died! 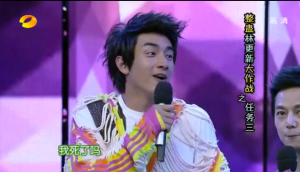 What they didn’t tell Lin Geng Xin was that during the entire time he was under “hypnosis”, everyone was trying to hold in their laughter… their backs were turned and basically trying not to make a sound. 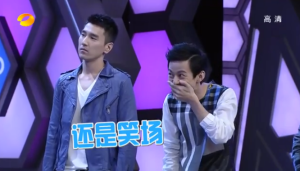 They give Lin Geng Xin a gift, which he says “Yay!” They give him a covered sign which he happily holds up, except when he uncovers it, it says “你被整了”. The translation can either be “You been pranked.” or “We just screwed with you”.

He was so pranked that he had even said, “It was the most wonderful feeling, I didn’t even feel Hai Tao’s weight.” The entire cast celebrate their prank. Lin Geng Xin’s expression is priceless.

They have to tell him that he wasn’t under hypnosis, he just believed that he was. So when he was under the hypnosis, he was just actually making himself believe he could withstand it. After a while, Lin Geng Xin asks, “did everyone know?” indicating to his cast mates. (Oh my god, he is so adorably slow). 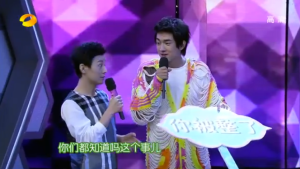 They go on to the next game, which is where the Mark and Lin Geng Xin bromance blooms in full swing. In this game, two teams go against each other. They have to look at 5 letters of “Pin Yin” Which is like the Chinese phonetic alphabet, and make phrases with them. If they are successful, they move these giant cubes towards their opponents. Whoever is able to get all the five cubes on the opponents sides, wins.

In this round, the hosts tell everyone to stand behind the people they believe will win, that will be the people on their team. Lin Geng Xin adorably shoves Mark Chao off his team, whining, “Go over to that side, I don’t want you on my team.”

The hosts says to Lin Geng Xin, “But Mark is supporting you.” Lin Geng Xin cutely says, “I don’t want his support.”

Lin Geng Xin doesn’t answer the question but whines and bounces on his feet, “I don’t want him”. Mark smiles and walks towards the other team…. awwww.

The hosts yell at him, ” Wake Up! You should be more worried that you will lose the game!”. (Yeah. I agree.)

Another host yells, ” Dude, this game isn’t about back strength it’s about your mind!”

More people leave Lin Geng Xin’s team until the girl host We Xin remains. Hai Tao yells at We Xin, “He’s already like this, are you an idiot (to stay on his team?!?)”. We Xin runs over and its basically everyone against Lin Geng Xin.

Mark runs over back to Lin Geng Xin and they hug. Ling Geng Xins, “Bro, thanks.” 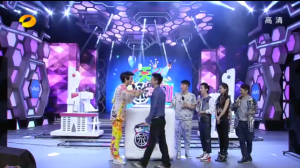 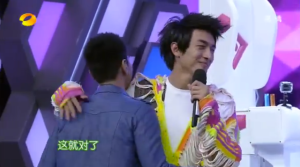 When they asks why Angelababy doesn’t go to Lin Geng Xin’s side, she replies, “I’m too lazy to move”

Ling Geng Xin and Hai Tao are given the letters, “W, H, F,P,D” and they have to use them to make words. Ling Geng Xin comes up with “Fang Pi” Every laughs, because Fang Pi in Chinese means To Fart or Bullshit.

Mark cheers for him and high fives him when they win. (Why are Ling Geng Xin and Mark so adorable together?) 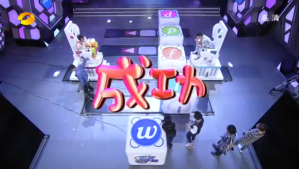 The losing team has to wear the word “Dumb” over their chest.

The hosts say that if anyone at this point wants to change teams they can.

However, when no one walks over to Lin Geng Xin’s team they all give their reasons for not changing. 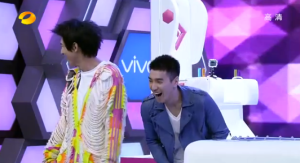 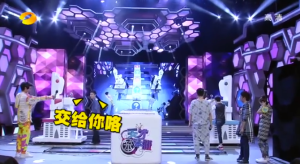 Lin Geng Xin replies back, “I think you really should rely on yourself more.” Marks reaction can’t be described but with a picture.

Lin Geng Xin “Xiao Mo Gui – which means Devil of a Rascal” To Which Mark gives him this look of disbelief, and then wipes his eyes after he says those words. Mark’s face is basically a mask of defeat. Here is the progression of defeat in pictures 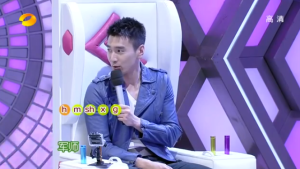 Angelababy is actually really good at this game and Mark has this decidedly panicked expression as he keeps trying to make Lin Geng Xin help him. Ling Geng Xin of course, is pretty horrible at this game and comes up with the worst/simplest ones.

Mark Replies, “Are you trying to comfort me?!?!”

In the end Angelababy wins. The two boys gets the “Dumb” signs put on them. The hosts remark that the Dumb stick is actually very fitting with Lin Geng Xin’s clothes today. It’s like a logo for him. Mark is pointing and laughing as well. 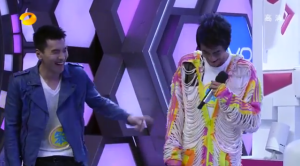 Lin Geng Xin asks Mark, “Don’t you think it’s really hard to think once you’re in that chair? But actually when I was helping you, I was getting stressed out and I was blanking as well.”

Thoughts: That was the cutest thing I’ve seen in the longest time. I can’t even go on to describe how much fluffly cuteness exsits between Mark and Lin Geng Xin. Only that they kept hugging and high fiving each other. They were so excited during the last game that I just rewatched it. Mark, if you ever read this blog, trust me, you’ve found the one bro who will last you forever.