Lu Zhen faces one of the toughest challenges of her time and Gao Zhan is running around trying to help her without letting people know that he’s helping her. I have to give a shout out to my editor elizaphantrex, who has grumpily agreed to edit my posts because I sometimes write like a drunken sailor.

Elizaphantrex here: Now that darling Rin Lee has introduced me, I guess I have to do my job.

Du Si Yi replies that Gao Zhan will have no choice but marry Shen Jia Min, she is the most likely candidate and comes from an exhalted family. Lu Zhen looks forlorn. Shen Jia Min asks her maid what can she do to make Gao Zhan like her more (she calls him “his Highness my cousin”). Her maid tells her to stop calling him that otherwise he’ll treat her like a sister. She also tells her to stop worrying about Lu Zhen, because she is too lowly to marry Gao Zhan and can’t be a threat. Shen Jia Min came to the palace for one reason, and they need to start working on it.

Lu Zhen asks a Eunuch to help her obtain Wu Toe, the poison she suspects killed her father. 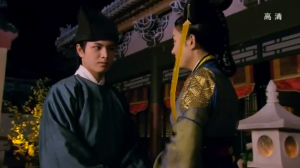 She makes tea with the poison, and realizes that it smells just like the one she saw her father drink that day.

Realizing that it would be dangerous if it is associated with her and can harm others, she decides to bury the remaining Wu Toe roots, sees a dead bird that drank the poisonous tea, and confirms the deadliness of the poison for herself. 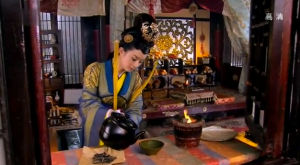 Lu Zhen and Ling Long are cleaning a harp that Lou Qing Qiang plans to use at the Spring Banquet (where the Emperor traditionally chooses his new concubines). Shin Jia Min comes in and admires it as well. The dowager plans to show off the new women to the Emperor, and will do so by having Lou Qing Qiang play the harp under that pretense, and encourage other women to try it out too. 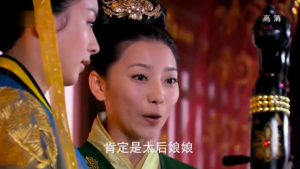 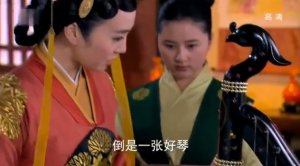 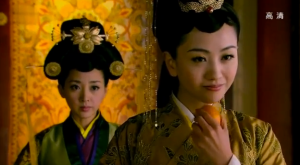 At the banquet, the Empress allows a particularly pretty girl to start playing Wang Shang Yi’s harp (the Emperor sits there, thoroughly bored). She starts playing but collapses, and it seems that she has been poisoned. While the Empress blames the Royal Concubine, the Emperor defends her by saying that she wasn’t even there today. They will unearth every stone in the palace if they have to to find the poisoner. 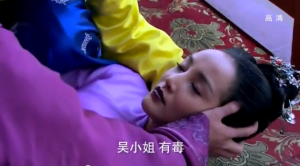 One of the examiners finds poison on the harp and since it could have only passed through the Treasures Department, the examiners go to search every maid’s living quarters. 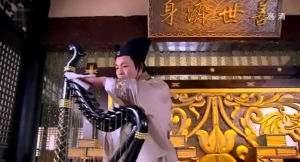 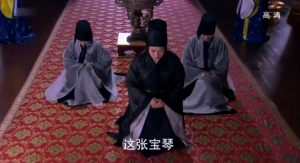 Shin Jia Min throws a hissy fit because she doesn’t want anyone to touch her stuff, but the examiner lady official scoffs at her. Shin Jia Min learns that Lu Zhen is the mistress of the Palace of Isolation and this makes her uneasy. 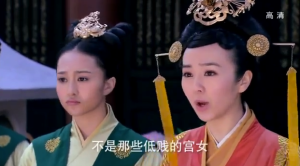 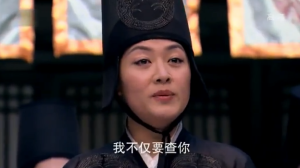 The guards find the Wu Toe Lu Zhen buried and asks whose it is. The Examinar lady official recognizes that it is a lethal poison and threatens to have every maid tortured. Lu Zhen stops it by admitting that it was hers, but she can’t explain where she got it or why she has it. 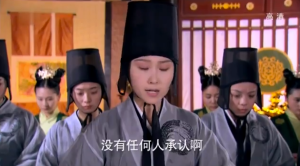 She is brought to Lou Qing Qiang, who asks her for an answer. Lu Zhen, protecting both Gao Zhan and the Eunuch who gave it to her, refuses to answer. They reluctantly torture her and throw her in prison.

Gao Zhan is struck with horror as he realizes that the Wu Toe he gave to Lu Zhen is what has caused her to be thrown in prison. 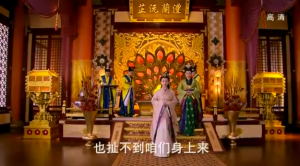 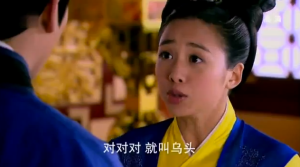 Uncle Zhou tells him that it’s not his fault, Gao Zhan has searched high and low across the land for the poison that was responsible for Lu Zhen’s father’s death. Gao Zhan is livid when he hears that they had tortured Lu Zhen and tries to go rescue her. She was trying to protect him by not revealing who had told her about the Wu Toe. 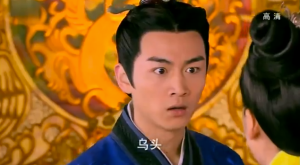 Teacher Yang visits Lu Zhen in prison, and Lu Zhen explains that she can’t tell her about the Wu Toe, because not only will she get people in the palace in trouble, she will have to explain why she received it and what she’s planning to do with it. She asks Teacher Yang not to let “him” know. Teacher Yang sighs and tells her that with the news being what it is, of course he knows already.

Gao Zhan is investigating the case himself and deduces that when the harp was sent to another office to be repainted, it might have been poisoned there.

He meets his sister on the way.

The Eldest Princess forbids him from liking Lu Zhen, at least until he marries Shin Jia Min and makes her his head Wife. She tells him that she is his only blood related sister and she cares for him the most. Essentially, she plays the sister card and the royal card at the same time. Shen Jia Min is the best choice and she has a high status and a powerful family. Especially after Huan Yun, wouldn’t it be better to find someone like Shin Jia Min? She tells Gao Zhan she doesn’t care how he treats Lu Zhen, but this time he can’t help her in this case since the one poisoned is the daughter of a high ranking general and Gao Zhan might anger him. The Princess grabs onto Gao Zhan and forbids him to help Lu Zhen, convinced that she is the poisoner.

Meanwhile Lu Zhen is accosted by a CGI snake that i think they used about 10 bucks to make ( I did a spit take chortle, it was horrible). It would have been better if they used a stuffed animal, and perhaps more real. Anyways, the snake lunges for her and she catches it as it lunges (something that even professional snake hunters can’t do) and she hears someone tell her how to make sure it doesn’t kill her (by grabbing the neck and temporarily paralyzing it). Lu Zhen looks around for the voice.

Meanwhile the Eldest Princess has talked to Gao Zhan until night and it appears that whatever she has said has not changed his mind. She leaves, exasperated. 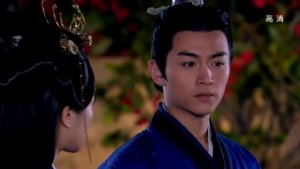 Shen Bi bumps into Gao Zhan who helps her up. She falls in love with him instantly and learns that he is the Crown Prince. She smiles stupidly after him.

Shen Bi learns that Lu Zhen is in prison and is pretty happy about it. 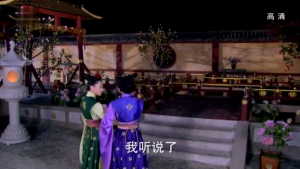 The next day Shen Bi meets Gao Zhan and asks after Lu Zhen as if she really cares. Gao Zhan mistakes Shen Bi for a good friend of Lu Zhen, and Shen Bi smiles to herself happily that she gets to talk to Gao Zhan.

Thoughts- I really can’t decide who I find is more a waste of time, Shen Bi or Shin Jia Min. They both are a massive waste of screen time and while I’m sure anyone who is reading this posting to this point just wants me to assure them that their dominance in the story is soon ending, I can only tell you that it will, once we get through some of the next few episodes.

Thoughts from Elizaphantrex: As an outsider reading these recaps, I feel like this next story arc is designed to show how truly, madly, truly desirable Gao Zhan is. You know, just in case you didn’t already know. Why else constantly introduce new star-struck lovers? Our Lu Zhen is a lucky lady.